This year, the Center for Lifelong Learning organized the manifestation Days of lifelong learning in Macedonia for the 12th time in a row within the national project for promotion of adult education structures, funded by DVV International from Bon.

Main partner of the Center for Lifelong Learning is the public Institution Centre for adult education, which in 2013 joined in this campaign. This cooperation is part of the memorandum concluded between the two partners, in which all activities and common projects were established at the beginning of 2015.

The Center for Lifelong Learning, as every year, informed its network partners and offered them to also join in the campaign. Hence, the following organizations have applied: The Open Civic University for lifelong learning "Joska Svestarot" - Strumica, the Open Civic University for Lifelong Learning "Krste Misirkov" - Bitola, the non-governmental organization "Vepro" from Struga, the Alliance for the Development of Adult  Education and Lifelong Learning - Tetovo and the People's University - Kumanovo. Because all these providers operate in different regions across the country, the events encompassed the entire country.

Traditionally, the campaign began with the opening ceremony at the Congress Centre of the Skopje Fair. The purpose of the opening is to mobilize the widest possible audience from the educational sector and to attract the attention of the decision makers and the public about the significance and importance of lifelong learning. Significant was the presence of the Minister of Education and Science, Mr. Abdilaqim Ademi, as the patron of the campaign. In his address, he stressed that the government seeks to strengthen the system of adult education and develop a national strategy for lifelong learning.

As part of the central event on the 05th November 2015, the competent state institutions for Adult Education, the Ministry of Education, the Centre for Vocational Education and Training and the Centre for Adult Education presented the priorities and challenges in the implementation of their policies. Through detailed presentations, the three institutions gave the audience a clear picture of the current state of education policy with an emphasis on lifelong learning.

During the month of November, the partners have joined the campaign to implement their activities. With these different themes, they have enriched the calendar of events.

The opening of the Days of lifelong learning was attended by 120 participants - representatives of various governmental and non-governmental organizations. These events have caused great interest among the general public and the media.

After 12 years of organizing the campaign for lifelong learning, the Center for Lifelong Learning plans to modify the concept in a way that will implement various measures during the year. This idea will be discussed in the coming year. 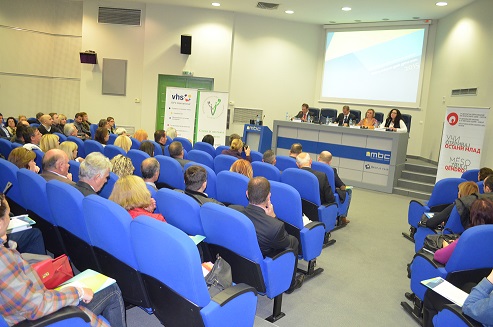